Southwest Antennas was pleased to support Drone America and the Nevada Institute for Autonomous Systems (NIAS) during their Bi-State, Multi-Agency Evacuation Drill, held on May 19th 2018 at the north end of Lake Tahoe.

This was the largest public safety operation conducted between California and Nevada to date, with the participation of over seventeen first responder agencies, simulating response operations during a mock wildfire situation with an injured firefighter. The drill also demonstrated how a commercial drone and manned emergency response aircraft can operate together safely the in same airspace during a real-time operation to save lives and property.

A forward operating base was established at Burnt Cedar Beach in Incline Village Nevada, from which a Drone America Vertical Takeoff and Landing (VTOL) Savant UAV was dispatched to a remote drop point 4.5 miles away in a densely forested hillside to deliver a payload via parachute.

Southwest Antennas provided omni-directional antennas with integrated goosenecks that were utilized for communication between the base station and the Savant UAV, providing real-time HD video of the operation from the aircraft back to the first responders.

After the payload was delivered with supplies to help stabilize a simulated injured firefighter, the Savant UAV returned to the forward operating base and landed, where it was quickly reconfigured with an ISR (Information Surveillance and Reconnaissance) payload and relaunched.

During the second part of the exercise, a Blackhawk helicopter was dispatched to airlift the injured firefighter to safety. The Savant UAV provided overhead real-time visual reconnaissance of the area, providing situational awareness to the incident command and flight operations teams.

During this part of the operation, the Blackhawk helicopter and Savant UAV shared the same airspace with the Blackhawk operating roughly 1,000 ft below the UAV as it performed the airlift evacuation. 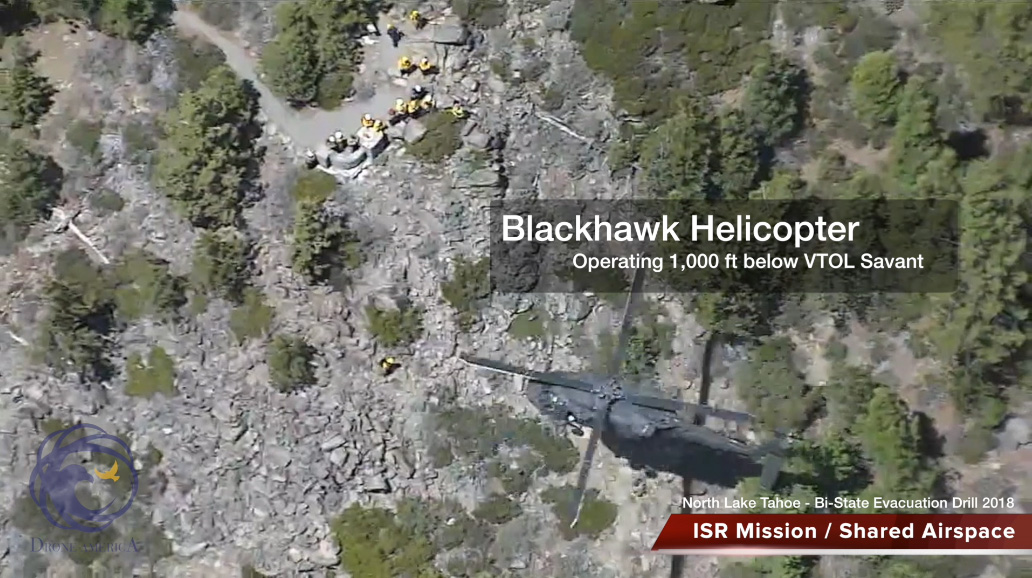 After the evacuation was completed and additional information about the simulated wildfire collected, the Savant UAV returned to the Burnt Cedar Beach operating base.

This bi-state emergency operation drill demonstrated how unmanned aircraft can be utilized during emergencies to provide critical supplies and video surveillance data to the response agencies, and can be operated in a safe manner in close proximity to manned aircraft.

Southwest Antennas is proud to support these agencies and the companies providing technical product solutions to improve safety and effectiveness of emergency response operations.